In our first post, we described a life expectancy report and the policy management process called premium optimization.  In this post, we will show you how we use these tools to minimize the carrying costs on a policy on an older aged insured to potentially save thousands of dollars.

In this case, we had a male who had purchased a $2M current assumption universal life policy about 25 years ago, and though he had not paid the premium in all years, there was still around $200,000 in cash value in the policy.  The level premium illustration that the carrier provided showed a premium of $51,342 per year to carry the policy.  However, we knew that the insured had health issues that reduced his life expectancy since the policy was issued.  We ordered a life expectancy report on the insured. The chart below (in column 8) shows the percentage chance the insured would be alive each year based on a group of 1,000 insured sharing his same underwriting characteristics. For example, after the first year, in that group of 1,000 insured the LE report predicted 30 would have passed away, which translates to a 97% chance the insured would still be alive.  Remember, in our first post, we said that the LE report does not predict the date or year of death but provides a data point.  Most people assume the LE of the insured to be the year in which 50% of the group would have passed away (year 5), or to be more conservative, the year in which 75% would have passed away (year 7). 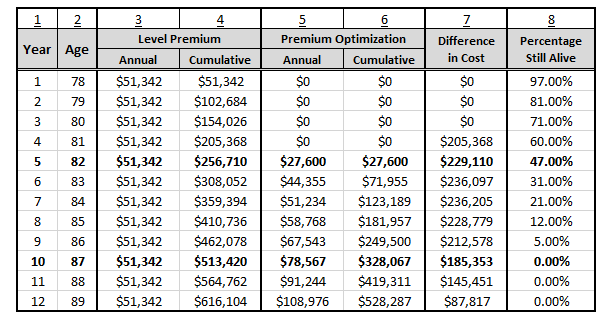 The use of a LE report and premium optimization is commonplace in the life settlement market where sophisticated investors are looking to minimize the cost of a policy purchased to maximize their rate of return.  In specific situations, it is a valuable tool.

At the Life Insurance Trust Company, we believe that your beneficiaries deserve this same type of service.  The goal – the duty – of a trustee is to maximize the value of the policy.  Reducing the carrying cost of the policy is one way to do that.

If you have any questions about this or any other services provided by the Life Insurance Trust Company, contact Leon Wessels direct at 605.574.1703 or lwessels@lifeinsurancetrustco.com.